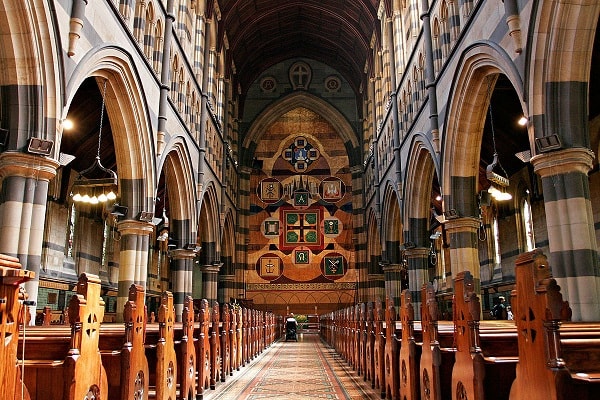 St Paul’s stands at the very heart of the City of Melbourne. In style, it echoes the grand Cathedrals of Europe. Designed by distinguished English revival architect William Butterfield, the Cathedral is built in the neo-Gothic transitional style, partly Early English and partly Decorated. Many consider St Paul’s to be Butterfield’s final masterpiece. St Paul’s Cathedral has been an integral part of Christian Melbourne since the city’s foundation: it stands on the site where the first public Christian services in Melbourne were led by Dr. Alexander Thomson in 1836.From 1836 to 1848 the site on which the Cathedral stands served as a corn market for the growing city. In 1848, it was granted to the Anglican Church to build the bluestone St Paul’s Parish Church. Consecrated in 1852, St Paul’s Church was used until 1885 when it was demolished to make way for the liturgical West-end of the present Cathedral.