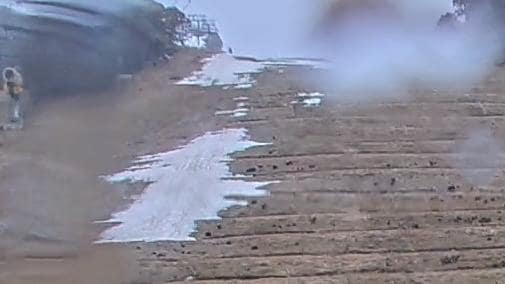 Snow has fallen in Victoria just a day after a spring heatwave saw parts of the state reach almost 40C.

Both Mt Hotham and Falls Creek in the state’s northeast ranges saw enough snow on Monday for a blanket to settle on the ground as a cold front crossed the state.

There has also been widespread rain with the city and suburbs recording 13mm up to 9am on Monday.

It comes after a spring scorcher saw some Melburnians flout coronavirus restrictions and flock to bayside beaches over the weekend to try and escape the heat.

On Sunday, Walpeup in the state’s northwest hit a blistering top of 37.1C while Melbourne reached a maximum of 29.5C.

But weather bureau senior forecaster Michael Efron said it quickly cooled down overnight with the colder conditions expected to continue throughout the week.

He said the weather conditions were “quite unsettled” with humid air coming down from the north contributing to the strong rainfall totals.

“Following that southerly change we’ve seen temperatures back in the mid-teens and even some snow falls across alpine areas,” Mr Efron said.

“It is quite a cold Monday with those southerly winds, a top of only 14C (in Melbourne).

“We are set up for some quite unsettled conditions throughout the middle part of this week but the good news is it does ease towards the end of this week.”

Mr Efron said Tuesday would see showers again across the southern and eastern areas of Victoria with light falls in Melbourne but up to 20mm possible in the far east.

On Wednesday tropical moisture from the north will bring rain and thunderstorm activity across most of the state with widespread falls of 15 to 30mm forecast.

The rain is expected to continue on Thursday with further falls of 15 to 30mm possible in Victoria’s central districts while in the northeast it could exceed 50mm.

By Friday the rain will ease to a shower or two with a top of 19C expected.

Mr Efron said it was a classic La Nina pattern with tropical moisture coming down from the north of the continent and interacting with a weather system from the west.

“Given the relatively wet conditions we’ve seen in previous months further rainfall could cause some flooding across the landscape and if we see some strong winds that could contribute to some trees being blown over as well,” he said.