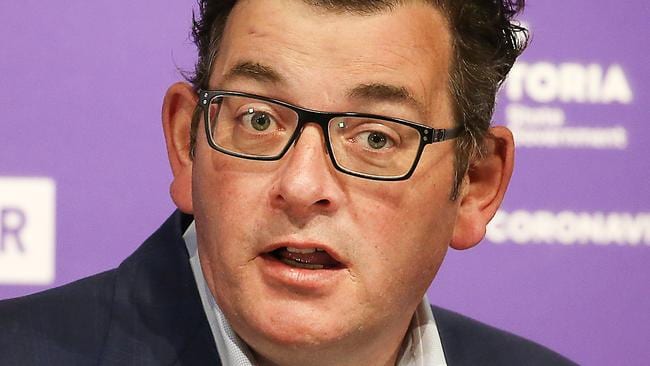 Daniel Andrews has faced off with the same reporter for a second day in a row, snapping back over a question about his state’s hotel quarantine scandal.

In closing submissions to an inquiry into the bungled scheme yesterday afternoon, counsel assisting Ben Ihle argued Justice Jennifer Coate could “comfortably find” that “the failure by the hotel quarantine program to contain this virus is today responsible for the deaths of 768 people, and the infection of some 18,490”.

The Victorian Premier told reporters this morning there would be “no hesitation in taking the action that is required to make sure that we do everything we possibly can to avoid anything like this ever happening again”.

But he was unwilling to be drawn on the fates of three public servants – Department of Premier and Cabinet secretary Chris Eccles, Department of Health and Human Services secretary Kym Peake and Department of Jobs secretary Simon Phemister – who were singled out by counsel assisting over the debacle.

Questioned over the futures of the trio by The Australian’s state political reporter Rachel Baxendale – following a clash yesterday over the logic of wearing face masks in certain situations – Mr Andrews got his hackles up again.

“Premier, Judge Coate’s already (been) told (by) counsel assisting that she should find that your three key public service chiefs failed to keep you and key ministers informed about major problems in hotel quarantine, that have claimed 768 lives and caused more than 18,000 people to become infected,” Baxendale began.

“Why do you need – I mean, is it even – given those findings, is it appropriate for you to maintain confidence in those people?”

Baxendale replied: “I didn’t. I said that counsel assisting had -”

“Yes, you did,” Mr Andrews cut in. “You said – I’m sorry, Rachel … Rachel, it is my practice to listen very carefully and what you just put to me was that Judge Coate had told – she said nothing.”

“No, no, no,” Baxendale injerected.

“She said nothing,” he said bluntly. “What’s more, you put it to me – and I’m happy if, if I’ve interpreted your question wrongly or if it needs to be rephrased – we can go from there. You just put it to me there’d been findings made.”

“Well, you didn’t actually say that. But in any event, let me go back to the first point,” the Premier said.

When Baxendale again interjected, he went on: “Well, Rachel, you didn’t. And if you’re going to put something to me, then I’m entitled to respond to it the way it’s put to me.

“To do otherwise is one of these games where – you know, in a couple of hours we’re all – I’m having all my words put back to me that I have somehow answered a question wrongly or I’ve been inconsistent.

“I have not – I’ve not acted that way. I’m not going to start acting that way now.”

Baxendale was then able to get a second question in, asking the Premier if he was “satisfied” that Mr Eccles, Ms Peake and Mr Phemister stay in their roles and “are safe to continue leading Victoria’s response to the pandemic”.

“I will wait till early November and then we will get a report and the contents of that can be the subject of what I think will be a lengthy discussion and important action by me at the appropriate time.”

It’s worth pointing out that Mr Andrews also insisted his confidence in former Health Minister Jenny Mikakos on multipe occasions, including the day before she abruptly stood down on Saturday after Mr Andrews told the hotel quarantine inquiry she was “primarily responsible” for the botched program.

Pressed by reporters yesterday over why he continued to say he trusted Ms Mikakos if he held her responsible, Mr Andrews said: “I had confidence in her.”

“But the Minister made a decision that she could not sit in the Cabinet. Any Minister who comes to that conclusion has no choice but to tender their resignation. And that is what happened. That’s a matter for her. She made that judgment. And I don’t necessarily – I don’t – that’s in no way – identical to what I said yesterday and the day before … Jenny was a very hardworking member of the team. I wish her well. I don’t propose trawling over this every day or three times a week or ever again. I don’t think it necessarily serves any purpose.”